We have already discussed the positive impacts of VR technology implemented in education and immersive journalism. What about using VR for the better-trained workforce? Provide your employees with real training in virtual reality, increase their confidence, efficiency, and skills. The benefits of implementing VR training are massive and difficult to ignore. The associated costs of such implementation are easily scalable by the use of simple tools such as Viar360 and  branded cardboard glasses.

Start your free trial of Viar360!

The most stressful jobs are the ones in which the wrong decision may end someone’s life. Worse, those decisions are not just an occasional element of the profession but are present on a daily basis.  We are not saying that the CEOs do not fall into the category of stressful jobs, but their decisions usually aren’t a ‘life or death’ matter. People with stressful jobs, discussed in this section, are doctors, police officers, military personnel, firefighters, and all the others who dedicate their life to help others in threatening situations.

The nature of their work expects them to be at their best in every moment of their day. Doctors need to make fast decisions and perform procedures they might have never done before or are practiced rarely. Even more, fresh graduates are expected to do the same. We all know that making decisions under stress takes a lot of confidence and knowledge. But in professions like this, people are hardly prepared to the extent of stress they are facing in the end.
​
It’s a fact that real-life mistakes can be avoided through virtual reality training. VR provides realistic simulations so young doctors can face their insecurities and are allowed to make mistakes to learn from them. Some universities have already established institutes and labs for exploring and developing VR scenarios for their students. Virtual reality is (according to USC Institute for Creative Technologies) not only help students in training medical procedures but also in communication with patients,  which can be just as important.

Police officers are the second group of people facing difficult decisions and actions. Virtual reality can help them prepare for these situations. Law enforcement agencies in Arizona will soon get seven VR simulators for field training. Those simulations will target to improve judgmental force and decision making of police officers out in the field. The 360-degree simulations will use realistic video, real weapons and an electric impulse return fire system, providing officers immersive experience and the best possible training. Again, one of the benefits is practicing communication skills with civilians and other officers in stressful situations.

Military personnel is the third group that is already harvesting the benefits of virtual reality. It is used for army, navy and air forces, ranging from training exercises to combat simulations. Especially in air force training, virtual reality has proven to be a very cost efficient alternative. It can also simulate different environments, enabling pilots to experience the impact of weather conditions and aircraft behavior in combat. Virtual reality offers unpredictable situations that are otherwise difficult to simulate, such as sniper attack. It can also show soldiers the importance of following orders and communication in stressful situations.

Another set of jobs worth considering are highly skilled/technical jobs. Jobs like astronauts or pilots or even something slightly less known, like deep water welding, are all extremely challenging. Primarily, because no one can expose you to the conditions before you are set to work.

Astronauts can be trained in a desert or even underwater, but no conditions can be an exact match to the ones they will face later on. Thus, it is of utmost importance that they are prepared as well as possible.
​
NASA is currently using VR for spacewalking simulation (astronaut leaving spaceship). The main problem is that the astronaut can’t know what it is like to spacewalk upfront the mission. The first research on using VR for solving the spacewalking issues dates back to the 80s. Today, every astronaut heading out there gets the appropriate training and firsthand experience in virtual reality. 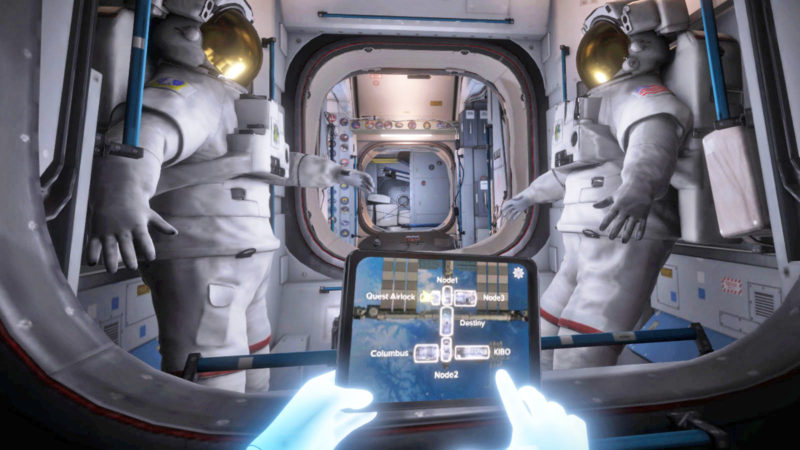 Pilots are using VR in a similar way described for military use (air force). In virtual reality, different models of airplanes can be simulated. Simulation can also include different weather condition or adverse scenarios (such as an airplane hijack or medical issues of co-pilot). Another benefit of VR simulations is the possibility to recreate airports around the globe so that the pilot knows exactly what to expect when landing.
​
Inspection of a plane is crucial for last-minute detection of small malfunctions that could have a great impact in the air. So-called walkarounds could be easily recreated in 360 videos, making it easy to point out the most common problems with machinery.  VR is thus crucial for all the personnel, as it allows them to get to know a wide range of aircraft without having to see them all in person (which could be time-consuming and costly).

Deepwater welding is mostly used for ship or oil platforms repair. Proper training goes beyond just technical skills as divers perform their jobs even thousands of feet underwater. As if diving isn’t by itself risky enough, these people are welding pipes that are constantly pumping hot oil.  Any mistake they might make is not only a hazard to them, but also for the wider environment. With VR they can practice onshore, to minimize the possibility of something unexpected happening.

Professional athletes can outperform their opponents by training in VR

The use of VR for training soccer or football has become a hot topic in recent years. As we all know, practice makes it perfect when it comes to sport. But more often than not it is hard to play out the exact scenario over and over again.
​
With virtual reality, professional athletes can replay the exact scenario until they perfect their role in the game. What’s even better, with replaying it, again and again, they do not risk any injury or overwork while still getting better. Virtual reality also helps with preparing and studying game plan by simulating the opponents’ strategies.

Memorizing strategies is much easier when immersing in them than by observing them on whiteboard or videos are taken from above. Currently, 6 NFL teams and many more college football teams use virtual reality in their training.

Soccer is another sport flirting with the idea of VR training. In September 2016 Van Gaal wanted to introduce VR training to Manchester United. He believed introducing the technology would make game analyzing easier. Future predictions are more kind towards VR implementation for fans, which is another topic worthy of an article.

Soccer stars, such as John Terry, Chelsea player, are already embracing the opportunities given by VR. He recently introduced a mobile VR app enabling users to immerse into his training and get a closer look at the path of a professional soccer player.

In the corporate world, everything depends on interpersonal skills – from sales to management, every employee and manager need to know how to act in certain situations. Due to extensive work with people, learning the interaction from theory can be hard. There are numerous studies on successful leadership, communication, sales strategies, and negotiations. But in the end, it all comes down to practice and prediction.

What makes a leader truly successful is the capability of fast response and decision making in every situation. Truth be told, most of the theories are hard to implement, especially when people are not behaving in accordance to the textbook scenarios. When facing an employee or a customer there is no time to Google the appropriate response or try to remember it. The response needs to be practiced and confident. VR provides exactly this – practice scenarios for confidence and right decisions under pressure.

​
The first, most basic use of VR in the corporate world is using it for facility tours. Large companies like Google, Apple, etc., are headquartered in enormous buildings every new employee needs to explore. For easier exploration, virtual reality tour filmed and connected with Viar360 can provide every employee with the info they need for easier orientation. Furthermore, VR tours are becoming popular for career days and potential employees. Commonwealth Bank of Australia is already implementing the opportunity to experience their potential employer.

The second use of virtual reality is the use for negotiations and sales meetings. Negotiations can be tricky to learn since practice is the easiest way of acquiring knowledge. All the techniques are very easy in practice but it is sometimes difficult to recognize situations in which certain technique is appropriate. In VR scenarios you can practice different dialogues and experience possible outcomes. Your sales team can easily practice objections and sales pitch without creating additional costs by learning from mistakes.

Lastly, VR is a perfect environment for customer interaction training. Nova days, getting bad reviews on the internet from unsatisfied guests can bring your business to the knees. From travelers to locals, the majority of people have the power of a few clicks to determine whether your business is worth a visit, especially if you own a hotel or a restaurant.
​
In VR scenarios you can practice customer interaction when the place is crowded or you are just facing a rude customer. With practicing right response, bad reviews can easily be avoided. McDonald’s is already using virtual classes for standardized and scalable training of its employees. Introducing classes with VR glasses is only the last leap in their strategy.

You can read more about how companies are using VR for corporate training here.

How can you start with VR training today?

First, you need a 360-degree camera. Today you can already purchase cameras for around 200$ but, honestly, penny-pinching can only take you so far. Invest in quality because cost reduction from all the benefits of virtual reality training is imminent.

Second, picture the scenarios you want your employees to practice. Whether it’s a sales meeting or a football strategy, your scenario needs to be exact in order to truly gain from the VR experience. Thirdly, you need to film the scenario and edit it.

Editing has become super efficient with tools such as Viar360, which enables everyone to just drag and drop videos they wish to use. Training your employees has never been easier. Prepare them for all the possible scenarios, let them learn from their experience without facing any loss caused by mistakes. Start a free trial with Viar360 and start the process today.